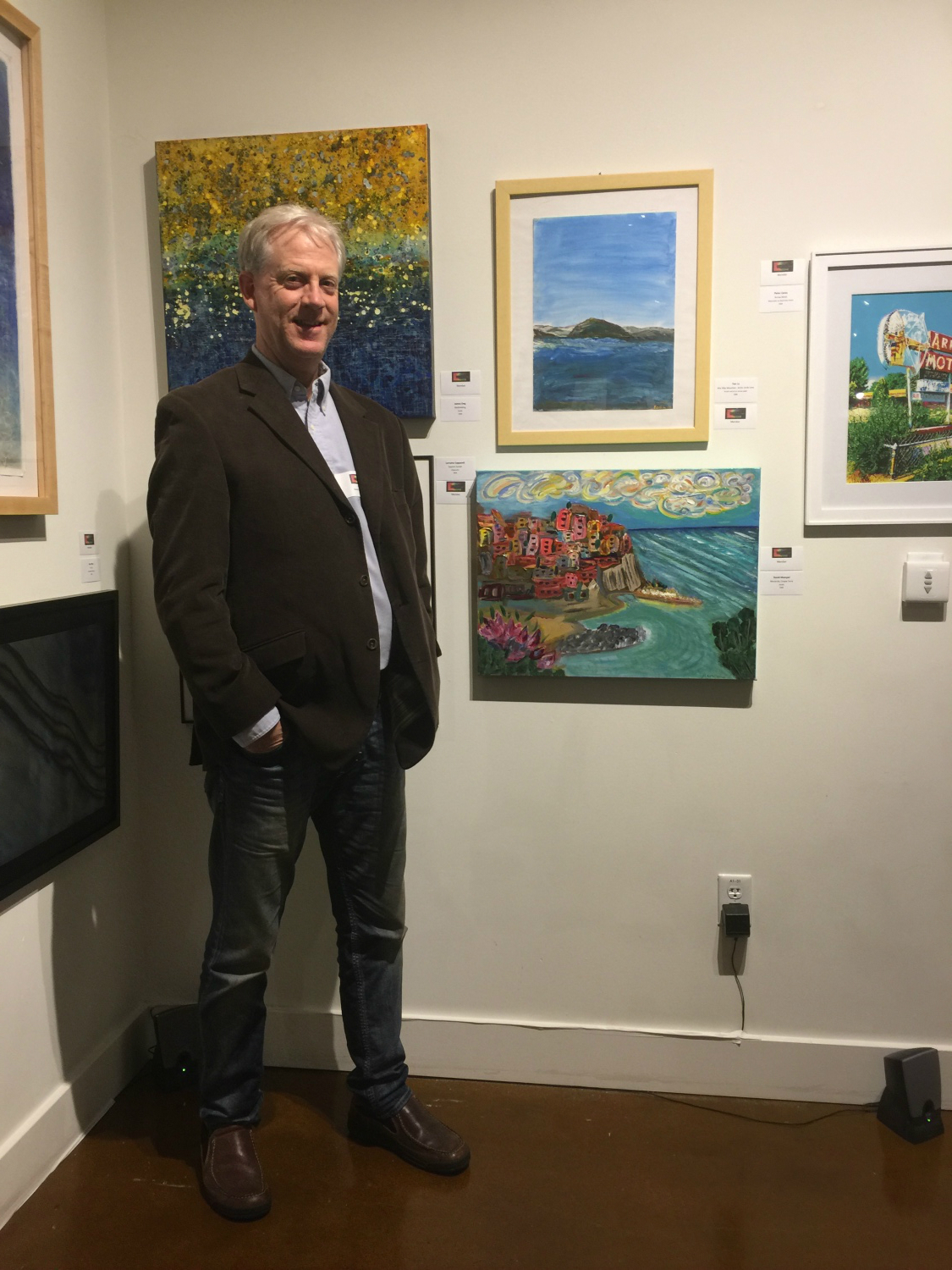 (Photo taken at my first public showing of art. The piece featured is "Manarola, Cinque Terre"  Acrylic on 18x24 canvas.  It sold to Patron, Julia Engles, at this location for $3oo.  (Still available as a print on this website.) Pacific Art League, Palo Alto, CA.  January 2017)

David Mampel first started painting when he was an ordained minister in Idaho Falls, Idaho from 1988 to 1992, creating huge mixed media pieces using old photographs and paint to try and understand his life.  At this time, he had written a poem imagining himself years later as an old painter.  He also painted an impressionist landscape that he gave to his sister Sara for her wedding that she still has hanging in her home.  David was surprised and gratified that he sold a pastel of The Grand Tetons for $15 at a garage sale when he prepared to move from Idaho to California, but then forgot all about it.  He was restless and seeking a creative life which eventually led him to leaving the ministry, and organized religion altogether.  He then put down the paint brush, picked up the guitar and moved to California to be a rock star.  The rock star morphed into a professional clown and for 25 years, David was, and is still known as "Daffy Dave" in the San Francisco Bay Area and currently in Seattle, Washington.

It wasn't until Dave felt bored with clowning in the Bay Area (partially because he felt he had mastered his act), that he started writing and published his memoirs and then, inspired to become a full-fledged writer, began working on a novel about a modern alchemist. Five years went by and now the novel sits in a drawer because, one day when he let the novel cool, he picked up the paint brush just for fun and suddenly everything changed.  That was in 2016 and two years later David now resides in Seattle because he wants to help out his elderly parents and live near his family, while also still clowning and painting as much as he can in his new art studio.  David has sold over a 100 paintings since he started doing art on this go around and now has a variety of genres ranging from impressionism to abstract.  He's had his paintings displayed in a juried show at the Pacific Art League in Palo Alto, The Longevity Institute in Los Gatos, CA., the courthouse in Redwood City, The Down Gallery of Art in San Jose, and was a featured artist at University Art Store (also in Redwood City).  David recently displayed his art in Washington State at the SeaTac Marriott, and now has two upcoming solo shows in Seattle at Caffe' Vita during the month of October 2018 and then in February 2019 at Cafe Luna on Vashon Island.  He mostly sells his original work and reproductions online via social media, often shipping paintings to patrons all around the country, but he has also sold some pieces directly from his studio and at shows like the ones at University Art Store and Pacific Art League.  He recently had selected paintings on display at The Red Onion Tavern for the 2018 Madison Park Art Walk in Seattle, Washington.  David now has 12 of his paintings on postcards that can be purchased directly from the artist at his shows or by contacting him via the email address listed here, as well as, many of his images on products at Zazzle.com on his page https://www.zazzle.com/david_mampel_art